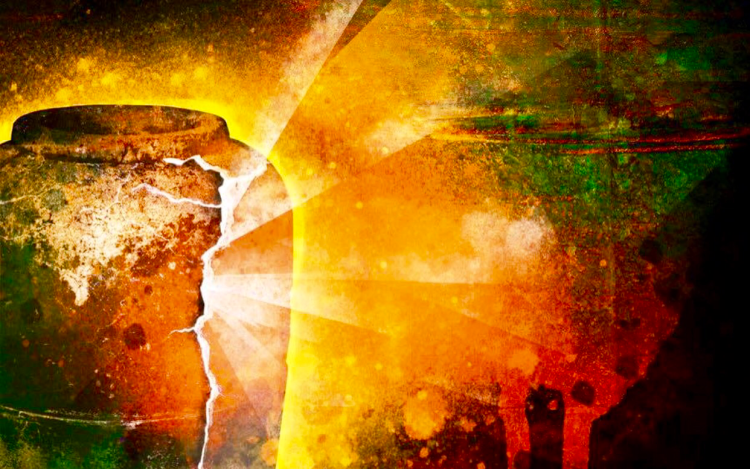 “We now have this light shining in our hearts, but we ourselves are like fragile clay jars containing this great treasure. This makes it clear that our great power is from God, not from ourselves.”

Within every person ever created there is an eternal treasure placed within their “clay jar” that was put there to bring forth the light of Christ and to be revealed in the dark places.

Way too often we stop short by seeing others according to their clay jar or outward identity rather than by the treasure that God placed within them. Often we view our own lives in this way as well. True identity is not found in the “earthen vessel” but by the treasure of the One whose image we were created in.

When we allow our focus to be on the jars rather than the true treasure and light within, we immediately enter into judging by the flesh and not by the Spirit. In John 8:15 Jesus tells the Pharisees that they judge according to the flesh when He calls Himself “the light of the world”.

“You judge according to the flesh; I judge no one.”

Not only is there great treasure within every person ever created but for those in Christ there is the “activator” of this treasure imparted to us…the Spirit of God. He is the light within us that draws forth the treasure.

“Do you not know that you are a temple of God and that the Spirit of God dwells in you?”

Being a mother has been such an amazing gift to train me in how to take these beautiful little lives (the precious jars of clay) and to call forth the treasures within each of them. Every act of nurturing (though imperfect in execution) was to guard these fragile jars and to draw out the treasure and light within them. As parents, it was our honor, privilege and responsibility to guard (through the Holy Spirit) these treasures.

“Guard, through the Holy Spirit who dwells in us, the treasure which has been entrusted to you.”

Whenever I hear someone say something negative about themselves or claim that they have no gifts I immediately long to go on a treasure hunt to find the beauty within them. God has been allowing many prophetic voices to speak and call out the treasures within people. It is such a beautiful thing to see men, women and children becoming aware of their great value and then begin to live in it.

We live in fragile jars that, in many cases, have been mishandled, harmed and judged wrongly. God is restoring and drawing forth the treasures within. As He does this the light is breaking forth in His Church. This is causing the sons and daughters of God to be revealed; for all creation groans and longs for this.

“For the creation waits in eager expectation for the children of God to be revealed.”

It reminds me of the jars that Gideon’s army carries with light in them in Judges 7. When they reached the enemy’s camp the jars were broken and the light was revealed causing the enemy to turn on themselves and be defeated. The light within our fragile jars is our weapon of victory. Our victory is not in numbers or in our own strength but it is the light within our broken jars.

Gideon’s army not only carried jars containing light but trumpets that would sound at the same time. There is the sound of truth that is happening in conjunction with the breaking of jars. The sound of the “fear of the Lord” is returning to the Church and will be a sound that brings terror and confusion upon the enemy. It is the sound of reformation and the sound of sons and daughters being revealed.

There is something about August that God is highlighting as a time of victory and of Jesus being revealed through His Church. I liken it to a picture of a light upon a lighthouse being turned on or the sound of these jars being broken. Mid-August is a kairos time for sons and daughters. It is a time of slavery being broken and the fear of the Lord replacing the fear of man and of darkness. I believe that 8/15 will began a time of treasures revealed, light in darkness and a spirit of sonship (adoption) coming with great power.

The sound of “Abba Father” will come forth in worship and intercession to reveal sons and daughters and to birth sons and daughters into the Kingdom. Hidden treasures will be revealed as the spirit of adoption breaks open the jars of clay.

If our words and articles are a blessing in your life, consider sowing a financial gift into our ministry. Go to: