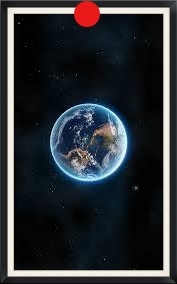 Last night I had a dream in which I was taken to a doorway with lamb’s blood on the top and sides of the door frame, just like the doors we read about in Exodus 12, when the Lord passed through Egypt in order to strike down every first born child in every home, unless He saw lamb’s blood on the door frame. The next scene was of the cross where our Passover Lamb, Jesus, bled and died for sins and our redemption.Then it was as if the two scenes gradually merged and began to change. What appeared was a new door frame; within it was the planet Earth, and on the head of the frame was a blood red moon giving the appearance of blood.

Exodus 12:12-13
“On that same night I will pass through Egypt and strike down every firstborn of both people and animals, and I will bring judgment on all the gods of Egypt. I am the Lord. The blood will be a sign for you on the houses where you are, and when I see the blood, I will pass over you. No destructive plague will touch you when I strike Egypt.

While I was still in the dream, I realized that when I awoke it would be Good Friday, with the Passover celebration beginning in the evening. I also remembered that Saturday there will be a blood moon once again. Although in my dream I only observed the scenes I described above and did not hear any words, I did feel like God was saying that this sign in the sky above our Earth tomorrow evening will be a sign of great hope, a symbol that He is reaffirming the promise that His blood is upon the doorpost of our world at this time. I also found myself praying for the eyes of the Jewish people throughout the world to be opened to the truth that Jesus was, and is, their Passover Lamb during this Passover season.

Many are expecting great judgement upon the world, but I felt as though the Lord was reminding us what He has already done for all mankind. He has already provided everything needed for our redemption and for our protection from every destructive plague and judgement for those who believe. I do not want to go too far in interpreting this dream, but I felt great hope when I saw the blood on the doorpost of our planet. I also sensed an urgency to pray for an opening of the eyes of the Jewish people, that they would receive a revelation of Jesus and His acceptable sacrifice for our redemption upon the cross. .

I have a sense that there is a very open Heaven for salvation between today (Good Friday) and the end of Passover, which is April 11th. This may be the time of the open door for the great harvest we have been hearing about; this may be a doorway in time that we are going to pass through to see many saved.

Luke 10:2
He told them, “The harvest is plentiful, but the workers are few. Ask the Lord of the harvest, therefore, to send out workers into his harvest field.