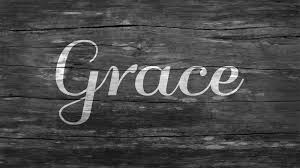 Grace! What an amazing gift to give to a people who once lived under the condemnation of their own sin and depravity. This unmerited favor saved us, redeemed us and took the sting of death from us. Grace has broken the heavy yoke from our backs and taken us from slaves to sons and daughters.

I often wonder if we truly understand the depths of this gift of abundant grace that has given us Heavenly “adoption rights”. I am not just a number in the midst of 7 billion others on this planet; I am His daughter and that is very personal. It is who I am! I have a very personal and significant identity because grace allowed me to be adopted into His family. This is true for anyone who has received the gift of grace that Jesus offers us through His death and resurrection.

Here is a personal example of grace played out in my life. The other day I was really fussing with a decision that needed to be made. I needed my Father’s wisdom because this was a huge decision. At one point I was talking to a trusted friend and he was praying with me for wisdom regarding this decision. Then he finished our conversation with one line that deeply impacted me. He said,

Wow, I love those “ah-ha” moments when you get to go into deeper revelation of His love and my identity as His daughter.

The words immediately broke the heavy yoke that I was carrying as I tried to discern what I was to do. I was able to make the decision from the place being unconditionally loved and enveloped in His grace. I had been laboring under an old identity of conditional love and a sense of dread if I made the wrong decision. I did what I believed was right in His eyes and He will honor and cover it with His love.

What freedom grace gives to us. Not freedom to continue to live in sin but to be freed from sin and the price it demands. We have the freedom to function out of His unlimited love and knowing that we are His child.

Today is a reminder of His abundant grace. We have so much to be thankful for. His grace abounds!

Ephesians 2:8-9
For it is by grace you have been saved, through faith—and this is not from yourselves, it is the gift of God— not by works, so that no one can boast.