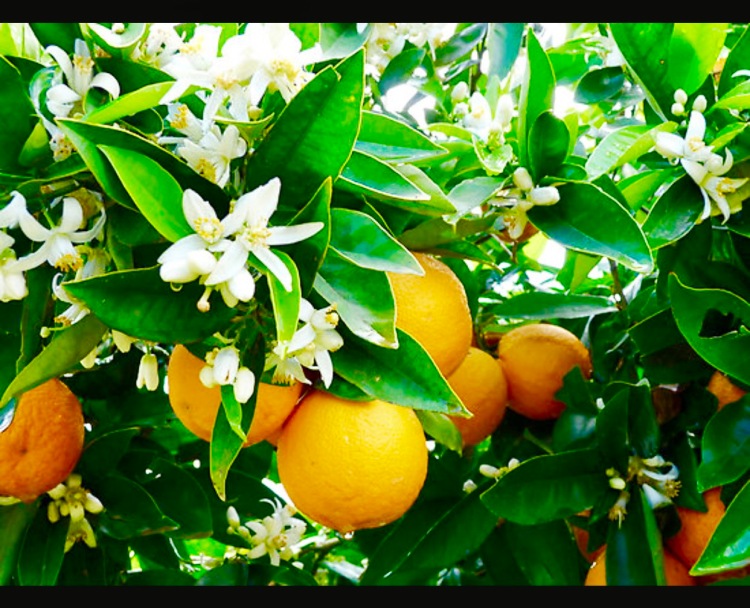 In the midst of a long winter season there is nothing sweeter than seeing a grove of trees that are full of sweet fruit. It’s a picture of “abundance”.

I heard the Spirit speak to me and say that this long, hard spiritual season that so many have been going through has prepared His people to bear much fruit. I saw in my spirit grove after grove of large and vibrantly colored fruit hanging upon trees. I saw row after row of vines weighing heavy with grape clusters. The time of fruitfulness is near!

“If you remain in me and my words remain in you, ask whatever you wish, and it will be done for you. This is to my Father’s glory, that you bear much fruit, showing yourselves to be my disciples.”

Throughout this hard season so many of God’s people have allowed their relationship with Him to be strengthened, their trust to be unwavering and their lives to become more aligned with His words and truth. The branches have been strengthened upon the Vine.

“My command is this: Love each other as I have loved you. Greater love has no one than this: to lay down one’s life for one’s friends.”
‭‭John‬ ‭15:12-13‬ ‭

When Jesus spoke these words to His disciples He knew that they were about to face hardship and would be tempted to distance themselves from Him and from one another. I saw “groves of trees” and “rows of vines” which speaks to me of the importance of remaining together in fellowship and unity. Great fruitfulness comes in the midst of family and fellowship.

Spiritual fruitfulness is coming that will be accompanied by natural fruitfulness. The enemy thought that this season of hardship and warfare would destroy God’s people and separate them from Him but quite the opposite has happened as so many have gone to a deeper place of abiding in Him and making God their dwelling place and sanctuary in the midst of the long, hard winter.

I keep hearing the well-known phrase,

I saw “showers of blessings” coming in April causing fields of flowers to appear in May. I first saw in my spirit lavender fields. Lavender is known as a flower (scent and oil) that brings peace. These April blessings will produce a peace that brings sweet sleep in the night and the breath of joy in the day during the month of May.

California, Get Ready for Fruitfulness!

I then saw the State of California covered in orange. I saw their state flower, the California Poppy, covering hills and lining roadways. Then I saw orange trees that had the sweetest fruit they ever produced. This was especially vibrant in Southern California.

The Fire of God is coming upon the Church in NorCal and SoCal; it will spread into the streets. Deliverance of strongholds will happen as the sweetness of God flows from the branches of the church. Passionate praise and worship will not be contained within the walls of the Church but will overflow into the streets, the city squares and it will be like the juice of these oranges being squeezed. People will “taste and see that the Lord is good”. Sing California…you are God’s worship leader!

What happens in California will spread like a beautiful river of God’s love throughout the nation(s). The Fire of God be like a wildfire of deliverance and purity and the passionate praise will flood the nation with the sweetness of His love and goodness.

I also saw in my spirit the fruit of the vine bringing forth new wine. New wine is sweet wine! I saw those who have gone through the process of feeling trampled, pressed and fermented in a dark cellar suddenly brought out of the hidden process and pouring out new wine.

Though these people felt that they had been set aside or forgotten as they were shut away in darkness after being pressed and trampled; they had not let go of hope. Suddenly they are brought into the light and poured out. The intoxication of the joy and goodness of God will be upon them and it will be poured out on many.

I also saw lands that are known as “wine countries” bringing forth this new wine of joy and gladness. The little foxes have been chased out of your vineyards and now the fruit will pour out as new, sweet wine.

As the fruitfulness comes forth it will have many colors and flavors.

This large bowl of the fruits of the nations being mixed together drew in the old and the young. They began to eat from the same bowl. It drew those who were far off (the prodigals and the lost) and it drew the hungry and the thirsty. All tasted and saw that the Lord is good!

“Taste and see that the LORD is good. Oh, the joys of those who take refuge in him!”

OH, THE JOYS! It is a time for fruitfulness, joy and unity in the midst of diversity.

Prayerfully consider sowing a fruitful seed into our ministry. To DONATE or become a monthly financial partner, go to: