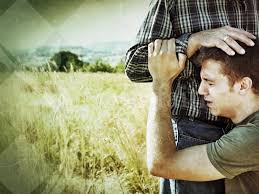 I sat down to wait on the Lord this morning and immediately heard the words, “The prodigals are coming home.”

As I heard the words I saw a picture of young men and women who have been in a battle and this battle was between what they knew and what they think thought they wanted. I saw them rage against their perceptions of God, rage against religion, rage against control and rage against conformity. But in that rage they had created their own destinies that were leaving them empty and angry.

Then, as if a gentle breeze came upon them I saw it blow away the darkness and the truth of the love of God settled upon them like a warm blanket. The raging ceased, the wrong perceptions were corrected and the independent spirit broke off of them. This revelation ushered them into true relationship with God. These prodigals were freed and filled in a moment’s time.

As this happened I began hearing the words from Zechariah 3 that talk about Joshua the High Priest. I turned there and read these words,

Then he showed me Joshua the high priest standing before the angel of the Lord, and Satan standing at his right side to accuse him. The Lord said to Satan, “The Lord rebuke you, Satan! The Lord, who has chosen Jerusalem, rebuke you! Is not this man a burning stick snatched from the fire?”

Now Joshua was dressed in filthy clothes as he stood before the angel.The angel said to those who were standing before him, “Take off his filthy clothes.”

Then he said to Joshua, “See, I have taken away your sin, and I will put fine garments on you.”

The angel of the Lord gave this charge to Joshua: “This is what the Lord Almighty says: ‘If you will walk in obedience to me and keep my requirements, then you will govern my house and have charge of my courts, and I will give you a place among these standing here.

I realized that God was calling these ones to Himself, rebuking the Accuser from their lives and changing their garments. Then He was calling them into realms of authority in His Kingdom. Their change will be that radical. They will be called, be changed and be commissioned and the old will become new.

Begin to thank the Lord for their salvation and their healing because it has already been planned and sealed with love. No longer plead for them but praise Him for them and for what He is about to do. Just when it looks the darkest God comes and brings the light that leads them home. Once they return to Jesus they will be filled to overflowing with His Holy Spirit and nothing will stop them because they will be compelled by love to go into all the world to see sons and daughters come home to their Father.

As most of our readers know; our family was in a serious car accident on January 3rd. Kathi sustained injuries that are still present today. Though she began to travel for ministry again in March the doctors have said that surgery will be required on two torn muscles in both her left and right shoulders. They also believe that she not only fractured a disk in her back but may have herniated a disk as well. This has left it very difficult to sit for long periods of time which traveling requires. They have encouraged her to stop all travel because it is causing nerve damage. We are trusting for God’s divine intervention and healing but are also moving forward with what doctors have instructed. As a family and as a ministry we need your help during this time.

If you have been blessed by Kathi’s encouraging articles and our ministry please prayerfully consider giving a one time gift or becoming a ministry partner with a monthly gift of support. Thank you from our entire family for standing with us during this time.

Gifts can be given through our website at http://www.inscribeministries.com Go to the homepage and hit the DONATE botton.

One thought on “The Prodigals are Coming Home”