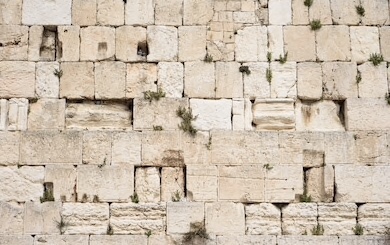 For a while now I keep seeing in my spirit what looks like the wall in the Book of Nehemiah before it was repaired. The wall was in great disrepair and this disrepair was creating a breach of security. At first I began to pray for people’s souls that had areas of disrepair and breaches within them (allowing the enemy access). But there has been a strong sense that there is more to what I’m seeing than the broken places of the soul in individual lives. Yes, that is definitely a part of it but I knew there was more.

Here in the United States we are in the midst of a government shut down that has happened over the issue of building a wall to secure the borders of our nation. I should have put two and two together to see that the broken down wall I keep seeing in my spirit and the governmental shut down over “building a wall” were connected. Here is why…

Our president has a couple of strong sayings that most of us are aware of. One of them is, “Make America Great Again” and another is, “Build That Wall!” Maybe these are not merely the words of a man but a man giving a message to the Church of America?

I was taken in the Spirit over our nation and I saw a broken down wall. Then I saw a massive angel with a red baseball cap, like the one that our president wears, that said, “Make America Great Again.” This angel was calling out on a bullhorn to the church to come and “Build the Wall!” I immediately knew that this was a wall of prayer. In the distance I could see a huge demonic army laughing and taunting this angel because the church at large had become complacent and unresponsive to the call to “come and build the spiritual wall.” It was like the mocking and taunting that Nehemiah heard as he called for those to rebuild the wall and the gates around Jerusalem.

I immediately understood that this broken down wall of prayer not had caused a spiritual governmental shut down. The government of God, that comes through the church taking her place in prayer and authority to legislate the will of God from heaven to earth, was not operating. Though I did see some groups taking up this assignment, it was not enough to secure our nation from the demonic forces that were planning a complete take-over. These demons understood that the wall of prayer around our nation and even around our president were not secure (had gaps and breaches) and that their plans to “invade” would easily be accomplished.

Today I felt the Lord say, “It is not too late to build the wall!” It is a crucial time for families, churches, groups, ministries, businesses and friends to come together to rebuild the spiritual wall of prayer around our nation and our leaders. It will cause the government of God to come forth (Be reactivated) with authority and it will prevent the enemy from invading our land while pushing back the darkness that has already destroyed many places.

America can be great; great in the eyes of God, but we must build the wall of prayer around our nation and repair the gates of praise. Otherwise, we will look back one day with great regret and say, “Why didn’t we see or hear the Lord in the day of our visitation and the day of invitation?” We will wonder why we didn’t respond to His request to come and build the wall of prayer to secure our nation?

We must respond and respond now to the angel of the Lord that is calling for us to come and build the wall of prayer and repair the spiritual gates of our nation. Now is the time.

Ask the Lord where He is assigning you and then gather with those who have been assigned to that area and begin to build it up. Pray for our nation, our president, our governmental leaders and pray that American will be great in the eyes of God!

Please share this word so that it will be a “bullhorn” to call us to build the wall!

To support this ministry with a financial gift to help us fulfill all that the Lord is asking of us, go to: http://www.inscribeministries.com/

One thought on “Build That Wall! An Urgent Call to the Church of America”